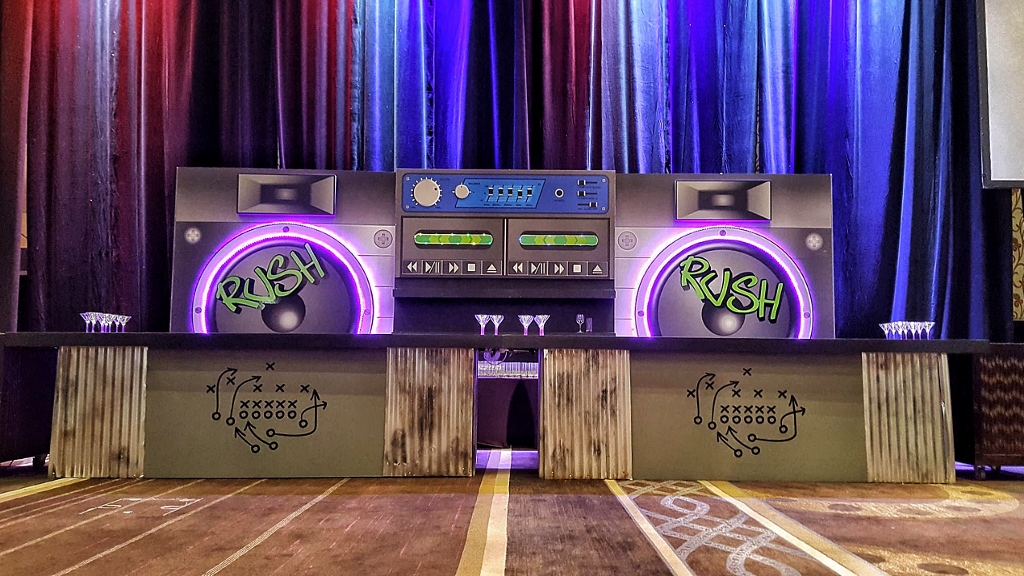 During this year’s Super Bowl festivities, our team worked around the clock to complete several customized designs for various events. These series of events serves as a great example of how clients can be inspired with customized suggestions that really bring their event to life. The unique designs become signature elements of their events and the level of satisfaction is exactly what we strive for at AOO Events. While one half of our team headed to Houston, the official Super Bowl city, the other half was on the ground at The Cosmopolitan in Las Vegas. This production was spearheaded by AOO Events producer Jimmy Surace, under the guidance of our creative director, David E. Merrell. The events, which took place over SuperBowl weekend, were executed simultaneously. We caught up with Jimmy Surace and AOO Events sales executive, Rheana Coon to discuss how it all came together at The Cosmopolitan in Las Vegas, Nevada. 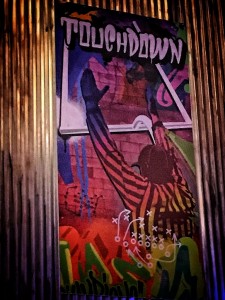 The client originally wanted an urban football theme, which could incorporate colorful “splatter art.” Together with the design team, Rheana and Jimmy suggested a graffiti artist that would come in and recreate original artwork based on colorful sports inspired prints that were specifically designed for this event. “What they wanted was an urban party, which one of the client’s coordinators came up with as she was inspired by the industrial space, so we had to figure out a way to add pops of color to a gray, drab, feel, which is when we decided to present using Graffiti art since it’s been on trend,” says Surace. “Initially the client wanted just perimeter décor but they also talked about needing directional signs which is why we ended up numbering the tables in graffiti. When they requested urban and graffiti, it was our intention to combine the perimeter décor with hanging graffiti art, but they were also functional so guests could find their seating,” says Coon. The design team incorporated iconic football imagery which was painted ahead of time by a local graffiti artist in Los Angeles. The panel was then packaged and transported to Las Vegas, which was supervised by AOO Events production manager, Erick Badillo. 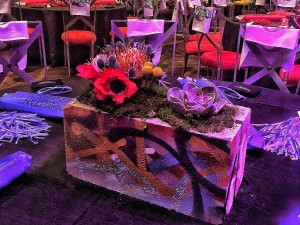 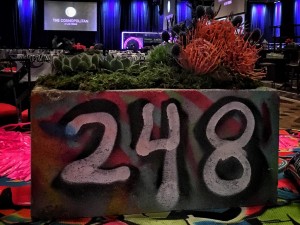 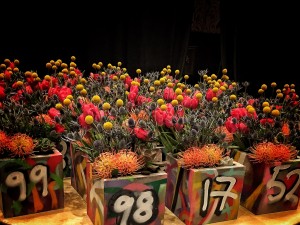 The floral design played up the urban contemporary feel inspired by flowers found in the big city.

In order to accomplish functionality while incorporating the design, we used cinder blocks that would serve as floral vases and table numbers as well as accentuate the theme of the contemporary design. “Using the cinder block tied everything into one, it was more cost effective for the client to spray paint the number on the block and luckily we had all the guys there to help with the heavy lifting.” The blocks weighed about 30 lbs each, which gave the team an impromptu workout while on site. The inception of the cinder block design was also quite interesting as the graffiti artist decided to stack all the blocks as a giant wall, spray paint it and then take them piece by piece so the cinder blocks would resemble a deconstructed wall. 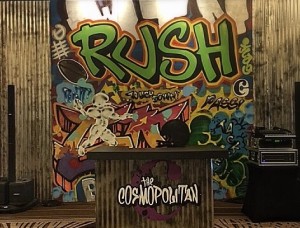 Originally the design team planned to do a different entrance piece that would sit behind the DJ booth, but we wanted to present a unique backdrop that could also include the urban design aesthetic. ‘We used a custom built 24′ x 12’ canvas and added The Cosmopolitan logo, which was a way to keep the client’s branding but also highlight the decor pieces. “It was our mission to find a graffiti artist that could also do digital renderings, so what we needed was an artist as well as graphic designer.” During the process, the design wasn’t quite urban and gritty enough so the team went back to the drawing board to incorporate more artistry from the graffiti work. Eventually they constructed graffiti prints attached to corrugated steel, which served as both the entrance piece and the DJ backdrop. “The client loved the DJ backdrop so much, they ended up purchasing the piece and as a thank you we included the branded artwork as well,” says Surace 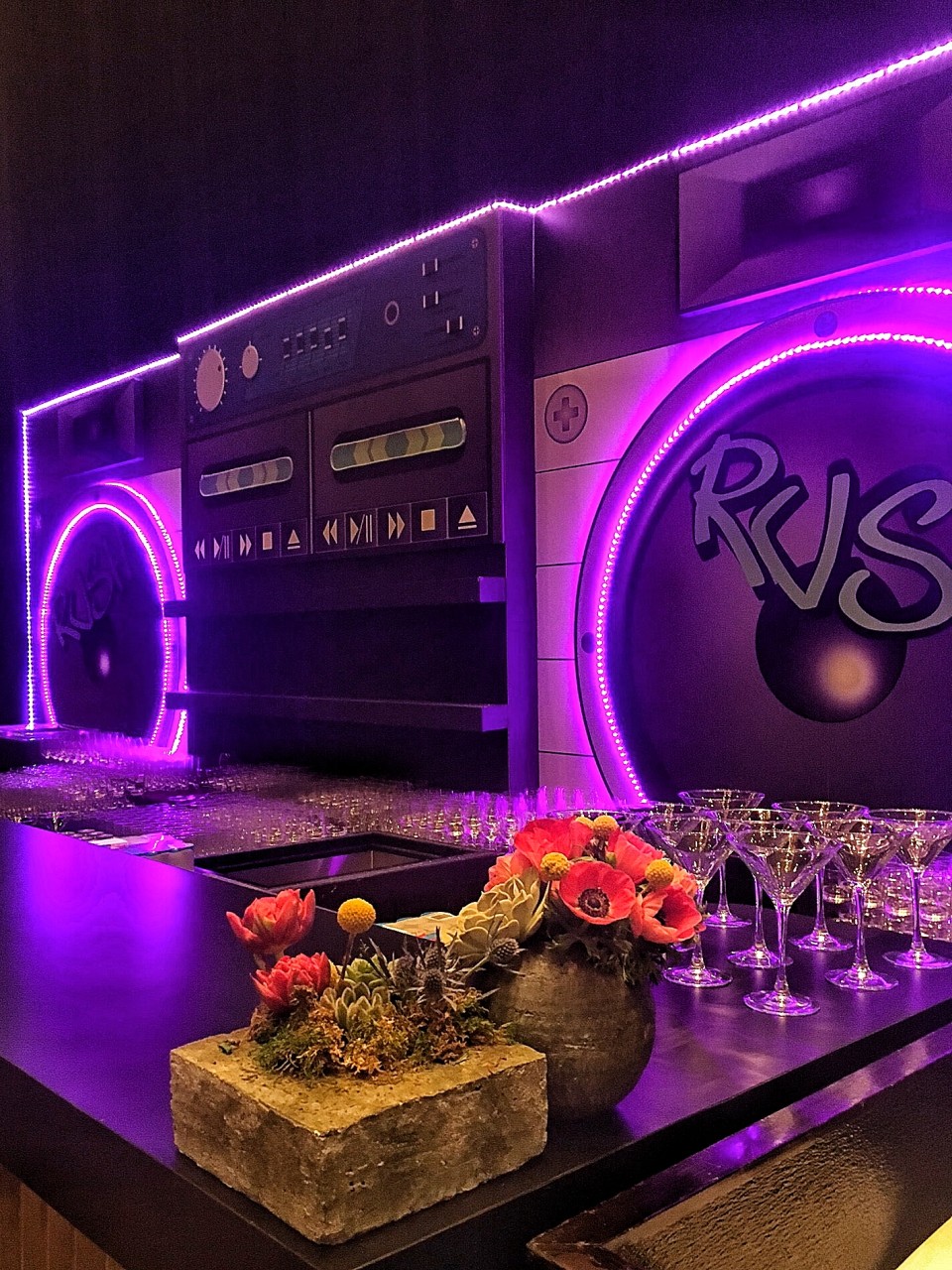 This 12′ x 24′ back bar was constructed in our warehouse with luan, foam board and illuminated with LED strips. 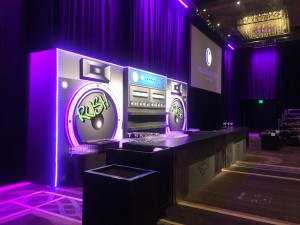 The back bar took center stage at this event, for it’s larger than life boom box back drop. “We originally designed some other bars and in that time the client saw a photo of a giant boom box bar that was also a stage, we were able to switch gears and design it from the clients expectations which were met above and beyond,” says Coon. The design team created the drawing and then contacted Creative Graphic Services (CGS), which assisted with printing the boom box design. Our production team then worked together to get the boom box mounted and lit, while keeping in mind the piece would need to be broken down in our warehouse and then transported to the event in Las Vegas.

After all the elements were revealed and the client did the final walk through, they were amazed with the level of detail that our design team used to build the customized pieces. “We try to keep the client involved as much as possible through the creation phase just so there’s no complete shock during the final reveal,” says Surace. One thing, Surace and Coon both acknowledged after the installation was the fluid teamwork that went into the event. “You’re only as good as your crew at the end of the day, and we have an amazing crew that really comes together especially for custom builds. There’s a lot of communication, it’s one team one dream here.” says Surace. “The client was really satisfied with how it all came together in the end and they truly loved working with our team and vice versa.” says Coon.

Contact us for your next special event at info@aooevents.com