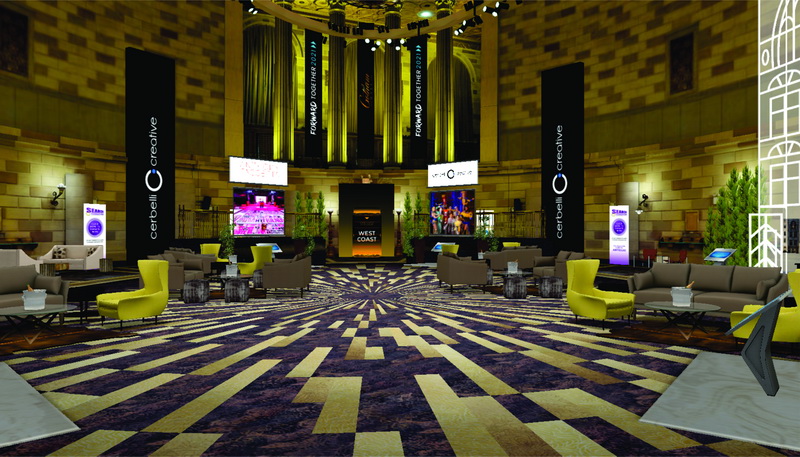 As an ambassador for Allseated, David Merrell and AOO were tapped by that company’s founder, Sandy Hammer, to produce the launch of ExVo, it’s latest virtual offering.

David and team worked alongside the coders and designers at Allseated to create the functionality and elements needed for ExVo to be consider conduit for engagement.

After several months, the event was ready and on January 27, the hospitality industry’s many associations came together with thousands of top professionals at the very first all-virtual conference.

Guests signed in as “avatars” which appeared to be robots in the computer screen but when two avatars meet, they can click on a greeting and their videos open up for them to have a live conversation.

Guests could then teleport between two cities — the House of Cerbelli in the East featuring Michael Cerbelli’s Hit List and more from Gotham Hall in New York, a simulated version of it anyway. In the West, Entire Productions held court at a virtual simulation of the Beverly Wilshire with entertainment and special surprises.

The after party will teleported everyone to a rooftop event in Mexico for the SEARCH Foundation. Above, the virtual version of it.

The team at AOO had a lot of fun building these simulated spaces. Reminiscent of the popular game Sim City, the program allows us to build out the space working with each designer. We’ve had such success, Allseated now offers our services as house designers as an option for producers.

We are also working with them to re-engineer more of the events that are part of conferences such as sit-down dinners and education. Stay tuned for more!!