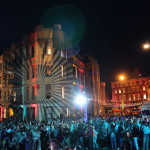 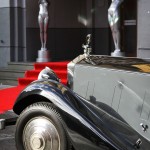 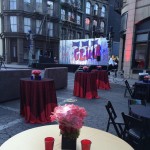 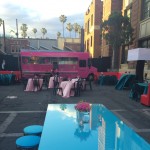 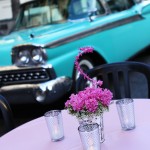 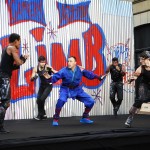 Delta Airlines hosted its global sales conference in Los Angles May 19-21, 2014, for 1,200 of its top marketing executives. “Lights, Camera, Action!” was the conference theme, and the opening general session set these words in motion throughout the three days of events. To give this group the LA experience, we highlighted the essence of Los Angeles at Nokia Plaza/LA Live, Paramount Studios and Club Nokia.

The opening reception created an elegant evening under the “lights” at Nokia Plaza. This event highlighted Los Angeles as the sports/entertainment capital of the world and featured the Lakers, the Kings and American Idol combined with major elements of Delta Airlines. The second night was a stronger nod to Hollywood as the entertainment capital with a back lot party at Paramount Studios and a turn in front of the “camera” for all the guests. The final night took guests to the “action” where they could “cut loose” at Club Nokia’s state-of-the art facilities with a reception, dinner and concert featuring the World Class Rockers.

The first event was a high-end, three-hour reception at Nokia Plaza featuring a personal appearance with Wolfgang Puck, who catered the event. The event featured all the amenities the client has to offer, including music by Jon Batiste, a featured artist on Delta Airlines, who performed on a custom stage in the plaza and a wine tasting with Delta’s featured sommelier, who selects all of the airline’s wines. Guests were “under the lights” for photo opportunities with the Stanley Cup Trophy (the LA Kings), the Lakers’ championship ring (and Laker Girls) and the Grammy Museum Trophy. All this was in the midst of the season finale of American Idol as guests experienced the thrill and excitement of screaming fans and the arrival of stars of this smash hit television show. The night was filled with music and sports, highlighting the contributions Los Angeles has made to the nation.

This event was inspired by the new lounge designs for the Delta Sky Clubs – a clean, modern design with urban influence – being done around the world. It included all customized lounge furniture in front of the stage on the plaza with oversized custom lamps and custom bars. This event required street closure between Staples Center and Nokia Plaza. We enclosed the entire event space with one 35-foot-long bar serving as the barrier on the north wall that butted up against Ficus hedge walls that lined the perimeter.

For the second night’s event, to provide an authentic LA experience and put guests in front of the “camera,” we took over Paramount Studios’ famous New York area and themed each street based on the movies and TV shows filmed on them! Here’s what we built:

A 50s Grease/Laverne and Shirley theme complete with John Travolta, Olivia Newton-John, Laverne and Shirley look-a-likes, along with all the other movie/TV characters. Nothing was missed from cars of the 50s to décor, lighting, strolling entertainment and food, including Baby’s Bad Ass Burgers diner style and Coolhaus ice cream sandwiches!

A 70s Godfather Theme with Al Capone, gangsters and their cars playing out their family wars under stringer lights and amidst food trucks featuring Rose’s Bella Cucina and Valentino’s Pizza Truck.

A Superheroes theme starring Spiderman in a custom live stunt show filmed with a real director and film crew as part of an actual movie. For this piece, we included company executives as stars and brought the audience in a part of the “movie.” A live shoot with an actual director, assistant director and film crew, everything was choreographed. Scenes featured superheroes and villains performing acrobatics out of building, a burning stunt man diving out of another building with Spiderman chasing behind him. Guests were cued when to yell and scream. As guests enjoyed the entertainment, they sampled delicious treats from a variety of food trucks including India Jones, Kogi Barbecue and the South Philly Experience. The finale revealed the Delta managers as stars and thrilled all.

This entire event featured a zoned sound system that played only the music affiliated with each theme area. If a guest walked into the Godfather area, he would only hear the music keyed to that area. Everything from lighting, sound, décor, entertainment and characters took guests from one theme to the next to experience true movie magic culminating in actually being a part of a film in front of, you guess it, the camera!

Closing night at Club Nokia kicked off with a reception and dinner with standing and seated tables and buffets. It was a true LA Lounge designed to highlight this special location. This final night truly brought the “action” and as guests rocked out with the World Class Rockers on the state-of-the art stage where American Idol filmed its season finale two nights prior. This experience allowed guests to let loose, have fun and emphasize the true superior capabilities of the venue. It was the perfect finale to three days of non-stop learning and entertainment.

Designed by AOO. Co-Produced with AlliedPRA, agency of record