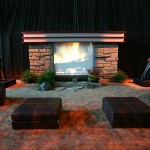 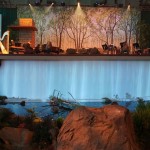 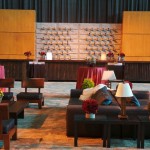 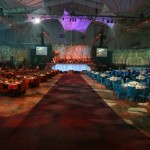 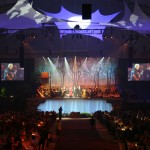 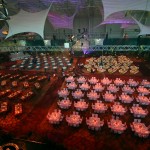 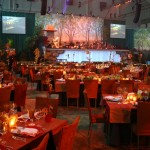 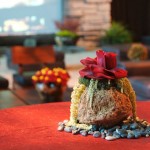 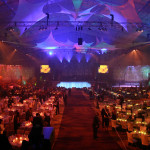 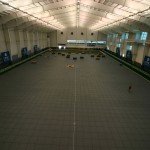 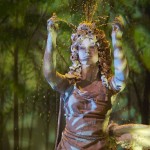 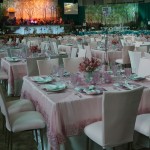 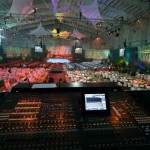 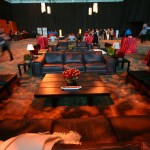 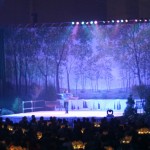 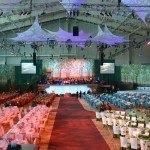 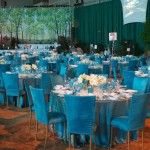 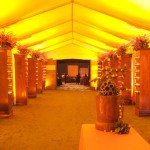 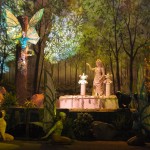 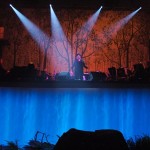 Creating an elaborate gala in the Pittsburgh Steelers’ 88,000 square foot indoor training facility, themed after Frank Lloyd Wright’s, “Falling Water” was an awesome undertaking. Scheduling eighteen 52’ semi-trucks, another dozen or so delivery trucks and site employees through a single access road was a logistical challenge. Six kitchen tents and canopied walkways also needed to be installed. So with round the clock installation and detailed timelines, the set up would begin just 82 hours before the first guests’ arrival.

Vivaldi’s “Four Seasons” was the theme as we adapted the famous local home “Falling Water”, designed by Frank Lloyd Wright. Located just outside of Pittsburgh, the house itself cantilevers over a section of waterfall in the woods.

Guests parked under a 50‘ tented carport lined with a green carpet, where valet parkers greeted them. Colorful banners along the entrance welcomed guests as they proceeded to a 40’-long registration tent. The registration tables lined the walls accented with tall wooden columns, styled in the fashion of Frank Lloyd Wright. They housed shelves of flickering amber glass votives and were crowned with giant sprays of orchids. Textured lighting filled the walls between the columns.

Standing cocktail tables dressed in burnt-red Bichon linen, the signature color of Wright’s work, were centered with floral in natural wood and rock containers. Additional tables were built with red mirrored tops and Wright-styled lamps. Giant hanging chandeliers created an intimate setting, even with an 80’ ceiling. Stylized wood and paper screens concealed the entrance to the main room, allowing a dramatic reveal.

The entire dining area was draped with 25’-tall hunter green fabric. Five 50’ hand-painted backdrops nestled in the natural foliage in excess of 2,000 plants and trees, some over 15’ tall.

Dinner was divided into four areas, with guest tables dressed in spring, summer, autumn and winter. Spandex panels hung from the ceiling for lighting effects and seasonal changeovers. 70,000 square feet of event flooring was covered with golden beige carpet and chocolate carpet pathways.

The (4) 20’x 40’ seasonal stages were decorated to blend in seamlessly with the natural décor. The winter stage was a frozen extension of a waterfall with ice and snow including a white custom polyurethane floor for the skating portion of the show.

The main stage, 10’ tall, 60’ wide and 30’ deep, was built in a cantilevered design similar to “Falling Water”. A virtual projected waterfall covered the stage facing with a natural water pond at it base. A replica of the house was simulated with a 16’ tall stone chimney and deep redwood accents matching the home’s architecture.

As doors opened, a 45-piece orchestra played from the main stage. Centering the room, an 8’x8’ stage was built for opening remarks by the celebrity host of the evening, Arnold Palmer, as well as the CEO of UPMC. Once finished, the show began in Cirque style, with four costumed woodland frogs pulling the stage off in four different directions as the room went dark.

Spring …..Flowers were projected on the ceiling and perimeter. The scent of roses filled the air with sound effects of thunder and rain. Poems were written for each season, and read as Vivaldi’s spring movement began.

Six video screens showed costumed butterfly dancers as they skipped through the tables and onto the stage where a living fountain came alive. One of the butterfly dancers flew up in the air, with the help of a body harness, adding a surprising touch to the birth of spring. The main stage was then dramatically lit as “Younger then Spring Time” was sung by the “New York Voices”. After the song and during the first course a solo pianoist played on stage.

Summer….. With the sounds of crickets and the scent of freshly cut grass in the air, a giant full moon projection slowly rose over the main stage and the room filled with soft moonlight. Fireflies lit up in the surrounding trees as Vivaldi’s summer movement began, accompanied by the summer poem. A giant dragonfly appeared across the room and, with the use of a harness, flew across to the stage. When it lit up, three bungee aerial performers began the firework show as Mylar confetti fell from the ceiling. “Summer Knows” was sung, followed by our pianist and the second course.

Autumn….. The sound of rustling leaves and the scent of apples and cinnamon filled the air to Vivaldi’s autumn movement. Gobo projections of falling leaves covered the ceiling and walls. From the foliage, a costumed bird watcher appeared with oversized binoculars. Venturing to the center of the room he meets a giant bird and interacts with him to the music. Suddenly the stage lights up and large white kites appear being flown by children. The kites, held by aerialists, were dancing in sync to the music as a young girl runs into the room scaring off the bird and the bird watcher. As her kite hits its highest point, the room goes black and Liza Minnelli appears on the main stage singing “The World Goes Round”. After Liza’s song the pianist continues and the third course served.

Winter….. Begins as the room fills with projected snowflakes. Wind sound effects blow throughout as the smell of evergreen fills the air. Our winter poem is read and Vivaldi’s music plays. With the sound of children laughing, a troupe of silver and white costumed dancers, waving long Mylar streamers, come running through the room and make their way to the stage where an ice skating couple completes their routine. The main stage lights up with the singing of “Let it Snow” and as the song ends, snowflakes gently begin to fall over the audience. The pianist plays and the final course was served.

The Fifth Season….. The Season of Hope! With projected flowers filling the room Liza Minnelli again took center stage singing “Spring Will be a Little Late This Year” as all the characters walked out on their stages and sat to watch her performance. From frogs to butterflies, giant birds and skaters, the room took on an intimate feel from guests to performers.