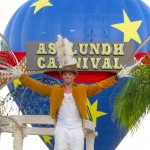 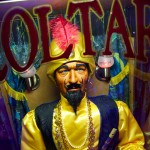 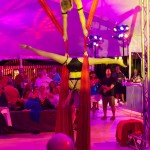 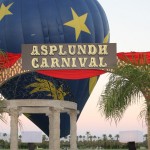 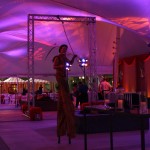 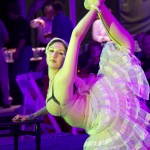 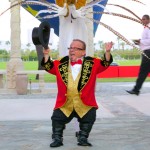 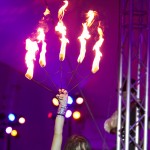 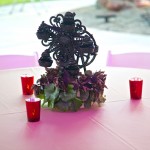 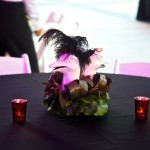 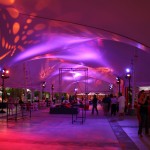 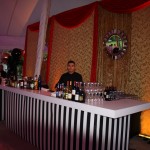 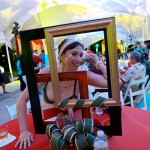 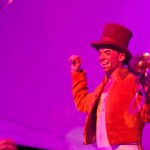 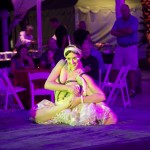 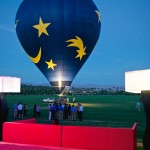 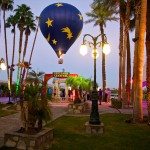 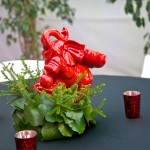 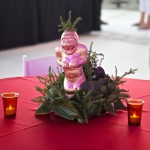 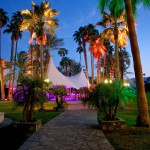 It had been a long time since we’d been asked to do a corporate event that was just for fun. For this event, the purpose was to lift the guests out of a traditionally business focused weekend and let them have some playtime. How to create that environment? We started with the venue where the event was to be held and headed off to the site to check it out. When we arrived at The Empire Polo Grounds in Indio, California and saw the 5-peak, 4,000 square foot Olympic tent where the event would be held, our inspiration for concept became a no-brainer. Circus! The choice made sense and we knew that we could provide a creative and fun event while playing to the natural aesthetics of the venue.

Let us start by saying that odd is hard work. Symmetry is very important in event design and within this event, we worked to give the event a great look that gave the sense that it was asymmetrical but yet felt slightly off balance. It was complex in its construction and thought theory. *cue the calliope music*

We immersed guests in an extraordinary Big Top experience – Guests could have their fortune told by Zoltar. They felt the wind as aerialists flew right before their very eyes. They watched as hoop artists twirled more rings than you have toes. They marveled as a human bender tied her self into a pretzel. They embraced their inner rock star and performed on stage… everything was peculiar and fluky at this carnival.

The Layout: We designed the space and the event elements to encircle the guests so that no matter where they looked there was something to see or do.

The Stage: The whole venue became the stage. We created a colorful palette within the canopy that was dramatic and patterned, which created an ever- changing kaleidoscope above the heads of guests. Hues of brilliant orange, amber, and red morphed and changed throughout the evening. Uplights added extra dimension and color pops. It was the entertainment that brought the stage to life. In reality, neither the décor nor the entertainment could exist without the other. A tent with lighting and no performers is not a circus or a carnival. Performers without a tent and performance space would never work either. Each element brought the other to life. We planned it that way to keep the evening interesting, whimsical and in constant motion.

The Décor: This was the first time we have had creative freedom with décor in a long time. The color scheme was based around a black, white, red and gold palette to reflect a vintage circus feel. Scattered throughout the tent, seated 60” rounds and 42” glass top sharing tables were placed for guests to sit and eat while the festivities continued around them. Round tables were draped in red, black or antique gold satin and topped with a differing centerpiece. The centerpieces were the thread that really tied the whole theme together, and so we made each one of them different and representative of an element of a circus. Every one was a bit off kilter and oddball and became as much a topic of discussion as the event itself.

Huge day beds were placed on either side of the performance area or “ring” to pull guests into the performance experience. The circus performers were an integral piece of living décor that brought the stage and decor to life. The décor and the entertainment blended seamlessly. Without the static elements of décor there was no stage, without the living performers, it was just a pretty space. The two disciplines balanced each other perfectly. Since the party was inside/outside, even the hot air balloon glowing overhead became a part of the quirky atmosphere. Every bit of the event was intertwined with dual purpose.

The Entertainment: The entertainment, or as we like to say in this circumstance, living décortainment was everywhere and inextricably intertwined as part of the décor. Rather than creating a stage show where a main stage would require focused attention, we sprinkled entertainment vignettes throughout the event. In reality, the whole tent was the stage as all the performers circulated around the space and played with the guests. The Ring Master played the role of a traffic cop; capturing everyone’s attention for each performance and then letting guests mingle again. After their performance each entertainer would melt back into an interactive role, always staying in character and playing with the guests. In between performance vignettes, a live karaoke band got guests up on stage to embrace their inner rock stars and keep the energy level up.

The Food & Beverage: The bars and buffets were equally “circusesque” and positioned around the perimeter of the event interspersed within the carnival game tents. Drinks and food were served from black and white striped custom bars backed with custom back walls of gold damask fabric, framed with red velvet fabric swags and vintage mirrors. The fare was simple circus foods with a twist, still fun and easy to eat, yet hearty enough to satisfy.

The Activities: There was a plethora of different activities in which guests could partake. Hot air balloon rides, carnival games, vintage photo booths, palm readers, tarot card readers, and henna tattoo artists. The only way to not have fun at the circus was to leave. There was something for everyone.